Join Keep Our Assets Picket At 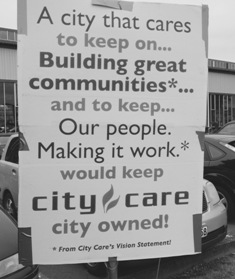 2016 is local body election year (the election is in October).

So, from the outset, Keep Our Assets Canterbury (KOA) wants the Christchurch City Council to know that the people of Christchurch will fight it’s shameful policy of flogging off our public assets, starting with City Care.

Just before Christmas the Council congratulated itself on settling its global earthquake claim with the biggest settlement in New Zealand’s history (although, in fact, it only received two thirds of the amount claimed – yet another example of the capital
strike that the insurance companies have been 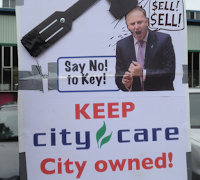 waging against the people and city of Christchurch for the last five years. Imagine what the reaction would have been if it was a five year long labour strike).

The Council announced its assets sale programme before it had even settled its insurance claim.

Now that it has received over $600 million in one lump sum is all the more reason for it to cancel that programme and withdraw City Care from the market.

It is madness for a city undergoing the biggest rebuild in New Zealand’s history to sell its own infrastructure company.

Come along and bring your friends. Show that we care about City Care.
.