Has City Care Been Sold? 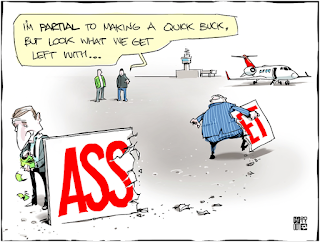 ed assets in line to be hocked off.

So, Keep our Assets Canterbury (KOA) suspects that it is more than coincidental that the Council has called an Extraordinary Meeting at 4 p.m. on Monday June 27th.

“The business of the meeting relates to funding from Christchurch City Holdings Limited and is likely to be held in public excluded.”

KOA has been opposed to this proposed sale from the outset and reminds all Councillors (particularly the eight who voted to sell assets) that none of them has a mandate to do so, as the subject of asset sales was never raised in the 2013 local body election campaign. We have presented Councillors with a perfectly reasonable request that they postpone any such move until after October’s election. We received no response.

KOA demands to know if City Care has been sold and, if so, to whom?

And KOA demands an end to secret meetings at which assets belonging to the people of Christchurch are furtively hocked off.