not a Board of Directors

Open government is fundamental to democracy

Keep Our Assets Canterbury (KOA) has it in writing from Christchurch’s Mayor, Lianne Dalziel, that the agenda for the City Council meeting this Wednesday (November 2nd) will include a decision on whether to restore Enable to the Council’s strategic assets list.


Enable is the Council’s broadband infrastructure company and is in charge of the ultra-fast broadband fibre optic cable rollout in the city.  When the Council voted (8-6) in 2015 to sell $750 million worth of publicly-owned assets over three years (a figure reduced to $600m in 2016), it only retained three assets on its strategic assets list: Orion (the electricity lines company) and the Christchurch Airport and Lyttelton Port companies.


Enable was quietly removed from that list, meaning that it could be sold without further notice (companies on the strategic assets list cannot be sold without a public consultation process).


In the course of the recent Mayoral election campaign Ms Dalziel was challenged about Enable by KOA’s candidate, John Minto.


This forced her to promise that putting it back on the strategic assets list would be on the agenda of the Council at its first post-election meeting.


So it is and KOA has it in writing from Mayor Dalziel that she will vote to restore it to the list (which is good news but only highlights that Enable should never have been removed from that list in the first place).


KOA has also learned that this Wednesday’s meeting will vote on whether to put City Care (the Council’s infrastructure and maintenance company) on the strategic assets list.


That will be an interesting debate and vote because the Council, with Mayor Dalziel to the fore, has just recently spent the best part of 18 months trying to flog off City Care as the first of the city’s public assets to be put on the block.


And KOA spent 18 months vigorously campaigning against that proposed sale


The Council failed to sell it and withdrew it from sale in August, in a stunning reversal for those Councillors hellbent on the privatisation agenda (so KOA 1; asset sellers nil). 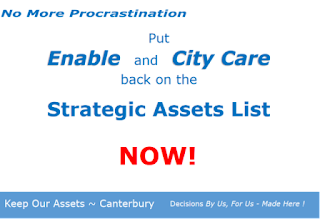 KOA has no indication which way the Mayor will vote re City Care on Wednesday.


Nor are we, or anyone else, likely to find out.


Because the Enable and City Care items on the agenda are being held in a public excluded portion of the meeting.


Why? Does the Mayor not want the public and media to know which way she and the other Councillors who voted to sell City in 2015 will vote this time around?


KOA urges Councillors to put both Enable and City Care onto the strategic assets list.


We intend to be at Wednesday’s meeting to reinforce that point.


Furthermore, we demand that the Council renounce plans to sell any publicly-owned assets. Permanently take that whole discredited and outdated 1980s’ relic off the Council agenda. 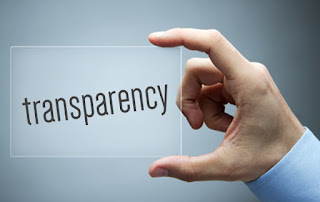 And stop these secret meetings, discussions and votes. These are our assets; the people of Christchurch are entitled to know the full details.


KOA says that the Council needs to behave like a Parliament, not the Board of Directors of a private company.


Remember that you are public servants, accountable to the public who pay your salaries.


You are not a business answerable only to shareholders


Open government is fundamental to democracy