Public Private Partnerships (P3s or PPP's) are spreading across Canada. Yet the international and domestic evidence shows that the claims of P3 proponents deserve close and careful scrutiny.

This report gives a brief overview of 100 projects from Canada and abroad. While P3 proponents claim that projects come in “on time” and “in budget”, the evidence does not bear out these assertions.

The Tragedy of the Private The Potential of the Public
.

Whether we face the post-apartheid state in South Africa, the corrupt Greek state, the paternalist and hierarchical British state or many other varieties of states, we are not simply defending public services as they were.

In all the cases in this booklet the point is to democratise, open up and improve the way services and indeed the state itself is organised: accountability, ending corruption, introducing participatory methods of government, achieving transparency, creating means by which the knowledge of all is used for the benefit of all.

Why Keep Our Assets?    Economic reasons

So, what would happen if nearly half of the electricity companies were sold to private, often overseas, buyers? They would demand higher profits. The boards of companies would be legally required to act in their interests - it doesn't matter if 51% remains in government ownership, the private shareholders rights to a higher profit would have to be respected. To make higher profits, they would charge higher electricity prices.
New Zealand has some of the most affordable electricity in the world because the publicly-owned companies hold the price down. If they were privatised, that anchor would disappear and prices would skyrocket.

Every year, $10 billion net flows out of this country as profits to foreign owners of New Zealand assets - many of them sold off in the privatisations of the 1980s and 1990s.

The Government estimates, conservatively, that private investors would make $360 million a year from buying the assets it wants to sell and that 20% to 30% of the private shareholdings would be owned offshore. That means about $100 million a year more flowing offshore every year.

In reality, it would probably be much more than that. National says they want to sell the assets to 'mum and dad' New Zealanders first, but how many of us have the money to buy something we already own? They want to raise $6 billion. There are 1.4 million households. That means each family would have to fork out $4,000 just to keep what we already own. We all know that, in reality, the shares would go overseas, sooner or later, just like in past privatisations. How will we ever grow as a country if the profits from everything we produce go into the pockets of people in other countries? That massive outflow of profits means that when a business or the government wants to build something here, they often have to borrow the money from foreigners, because we don't have enough of our own savings. 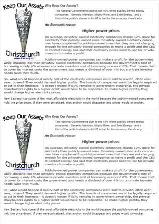 That money has to come from somewhere. It could come from higher taxes. It could come from cuts to public services. Or, most likely, it would come from more borrowing. The Government would get a one off boost from selling the assets but that loss of dividends, made up for with borrowing, would mount year after year forever, long after the sales proceeds were gone.


On top of those dividends, the government makes a gain when the value of the companies increases (equity gain). That isn't money in the bank, like dividends, but it is an asset that gives the government's debtors more confidence and makes it less likely that we will get another credit downgrade.


The four energy companies had an average return on investment of 18.5% per annum over the last five years, including both equity gain and dividends. This is more than four times higher than the Government's cost of borrowing at 4%. Would you borrow money on your credit card at 18.5% to put in a savings account for 4%? Of course not. It doesn't make sense. But giving up returns of 18.5% to save 4% is the same thing, and that's what National is planning to do. In the long-run, selling highly profitable companies for a one-off gain would mean more government debt, not less.

* Backgrounders courtesy of the Greens originals can be found here