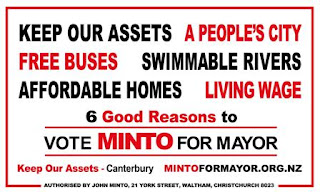 Kia ora to the campaign team and campaign supporters

A very heartfelt and personal thanks to everyone who helped out in so many ways on the Minto for Mayor campaign trail.

We were all surprised and delighted at the fabulous support through generous donations of money and expertise, many hours delivering leaflets, time on corners waving placards and help in so many other ways.

In total we raised about $20,000 in donations which enabled us to -

We set out for the mayoralty with the modest objective of making asset sales a major election issue here in Christchurch and on this basis I stood as the Keep Our Assets Canterbury candidate.

We have also made other gains on issues like getting the government/council cost-sharing agreement out in the open and pledges from the mayor the city will be able to debate it.

Similarly we have helped change the public dialogue on other issues such as swimmable rivers, the living wage, high salaries for senior council managers and public transport.

These are all significant gains from the campaign and only possible because of your support.

Once again - Thank you all.